Originally I wasn’t going to write a blog for the things we did in Georgia, I’m falling too far behind and I’m conscious that my access to Wi-Fi is about to drop rapidly. And although I do have one specific story from the mountains, the rest our time there was nowhere near as eventful. But I still want to it a mention because it’s a beautiful country with great wine.

Our first stop in Georgia was Vardzia. In a country renowned for its monasteries – particularly those carved into the rock – we could not miss an opportunity to visit them. Also, I think dad has developed quite a liking for Cave Monasteries, I’ve had to remind him on a couple of occasions that there is more to see, and that variety is the spice of life. However, Vardzia is more than a monastery, it’s a fifteen story city carved into the side of a cliff. We spent our days exploring the honeycomb of caves, climbing impossibly steep steps of the edge of the rock face, and crawling through escape tunnels. We spent our afternoons cooling off in the river that sliced the valleys, creating the cliffs which would one day be chiselled into. And at night we sat on the balcony of our hotel, watching the lantern, lit my monks, flicker on by the mouth of the largest cave.

Our next stop was the capital, Tbilisi, a city unaffected by the setting of the sun. We walked down the street and everywhere I looked something was happening. Girls in bright flower crowns wove through the crowds, unlinking arms to pass groups of drunken men who hung off each other’s neck as they staggered back and forth, yelling in each other’s ears. More flower queens sat singling sweetly along to a small stringed instrument, the hat in front of them filled with coins and notes. A baby stared, wide-eyed at me over the shoulder of her father. People sat eating pancakes on the pavement alongside others eating steaks at white clothed tables. Above us passed the cable car, flashes of cameras briefly lighting the wires, and higher still hung the moon, its presence unacknowledged by the city below that refused to sleep.

Our final stopping point before crossing the border into Azerbaijan was the Caucasus mountain range. The story of the evening requires a separate blog in itself, but for now, I’ll take you to the point where the evening turned. The drive to the highest, snow-capped mountain held many surprises including, tumbling waterfalls, mineral deposits that created vast orange formations, and mountain-side roads that made driving feel closer to flying. By the time we reached the monastery, the last ‘easily’ accessible point, the sun was beginning to sink into the largest mountain behind us, throwing the glaciers that nestled in its ridges, into shadow. Despite already being at a high altitude, I had to crane my neck to look up at the surrounding peaks. I felt so small as I stood a fraction of the size of a monastery, dwarfed by a mountain, which in turn was a minuscule part of its range. When we started back down the mountain, the unpleasantness descended with the darkness around us… 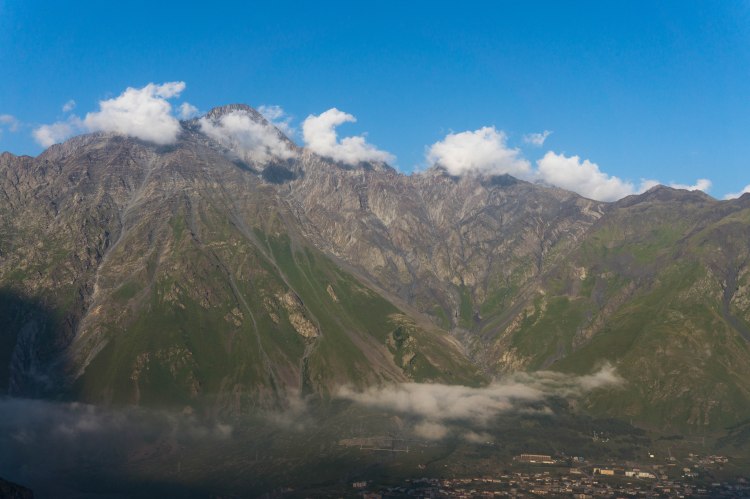 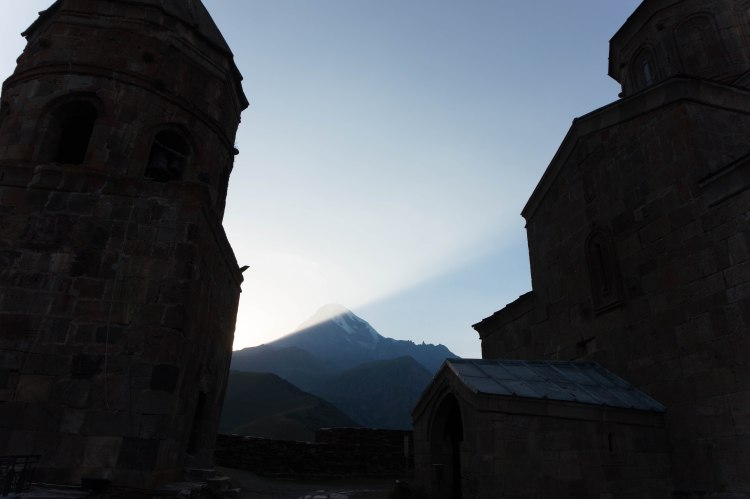