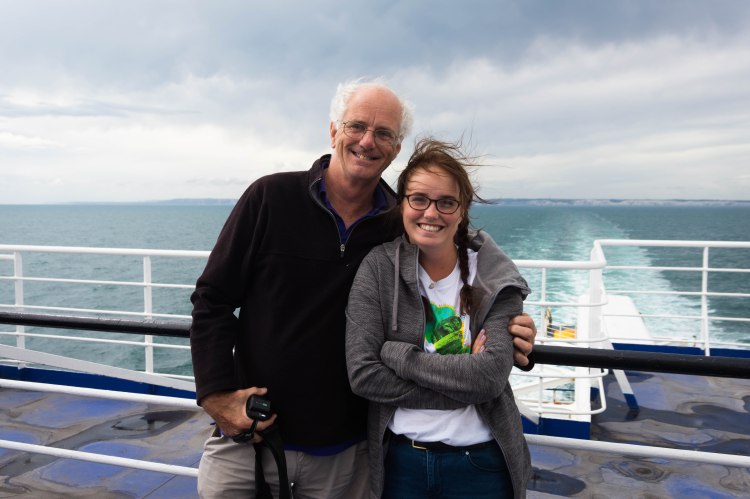 Yesterday we left England, we woke up in my house in Colchester, packed our bags, said goodbye to mum, Laura, and Annie and left. The drive to Dover was particularly uneventful, to be honest, I slept through most of it. We had planned on driving all the way into Germany as we’d managed to get an earlier ferry, but when we started we decided that we actually couldn’t be bothered, and would much rather visit Ypres instead. This was mainly to do with the memorial ceremony that happens every single night at the Menin Gate and has done so since the 11th November 1928 (excluding a period of German occupation of Belgium during WWII). We had been there once before in 2009, but couldn’t resist going again.

We arrived at the campsite just before seven, and, believing that the ceremony started in a few minutes time, hurriedly pitched our tents and power-walked the ten minutes into the walled-town centre. When we reached the Gate, crowds were lining the road that ran underneath the archway. More and more people arrived until there must have been about 500 locals, tourists, and military personnel all there to pay their respect to those lost during the War. I lost Dad when the roads were closed off and people moved round to get a better view. As I stood there silently, I listened to the conversations happening around me; history lessons on the world wars, the current situation in Afghanistan, how the day has gone so far, children being told to behave, as well as conversations in languages I don’t understand. The air was filled with noise, all of which was amplified by the arch we stood underneath. I noticed two men standing to attention in the cleared pathway that lead from one side of the gate, opposite the steps where poppy wreaths were laid. The men were elderly, one leaning heavily on a stick, both in decorated uniforms.

Three buglers, again in military uniform, marched across the road, towards the poppies before turning to face us at the entrance to the gate. Trumpets were raised to lips and the Last Post was played. Starting softly with just one trumpet, before building into the trio blasting out the famously haunting tune. On the final note the three started but then two fell away, leaving the lone trumpet once more. The final note echoed around the arch before ringing into silence. Next, the man leaning on his stick marched into the middle of the road before standing to attention. He read For The Fallen. His frail voice was hardly competition for the sounds of babies crying and I was only able to catch a few of the lines he spoke. “They shall not grow old, as we that are left grow old…”  The gate then descended into a minute of silence as heads were bowed, and eyes were closed. What happened next must have been a new addition and took me completely by surprise. A male choir began to sing Bring Him Home, from Les Miserables. It went from silence to an archway bursting with intertwined harmonies, bouncing off the walls and filling the air. The surrounding conversations from earlier were replaced by sniffing, quiet crying, and whispered “are you okay?” met by slightly louder sobs. A child on the floor near me sat staring forward, holding on to the dog in her lap. Rain began to fall, slow, heavy drops that ran down cameras and phones that were being held up to get a better view over the crowd. During the song, a procession of different people crossed the road to lay wreaths of poppies. A final song was played on the trumpets, the two men stood in their original position opposite the poppies, and when the gate fell to silence again they saluted towards the poppies, turned, and left. Almost instantly noise returned to the Menin Gate, it filled the archways just as the trumpets and choir had done previously. It was like a spell had been broken and everything was as it was before. The crowds dispersed and the roads reopened. After only a few minutes all that was left were a few people looking at the walls engraved with the names of the 54,896 soldiers from WWI whose bodies were never found. 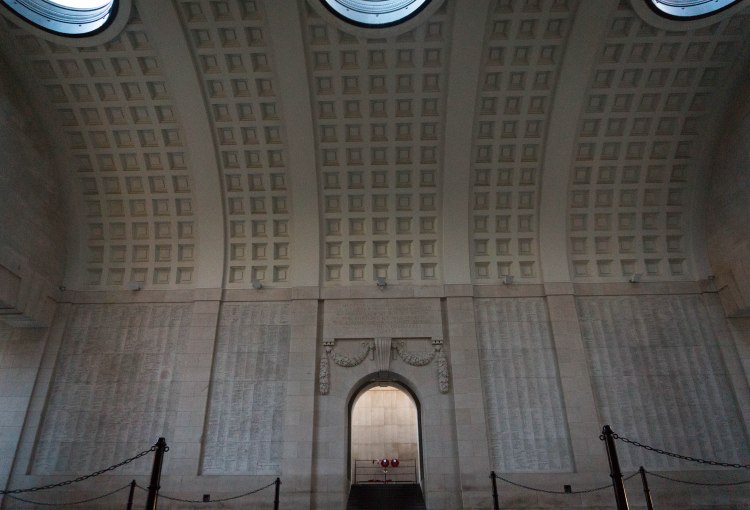 We stayed for a little while before leaving to find some food. We went to a brasserie and sat inside drinking and eating as the rain fell heavier outside, emptying the square we sat at the edge of. When we finished we returned to the Menin Gate just as the rain had passed over and sunlight, lit the tops of buildings and sent a rainbow arching through the sky. It was deserted now and we spent time taking in the names, the disproportionate amount of lost privates compared to those of higher ranks, the soldiers who served under a different name, most likely because they were younger than the legal age limit of nineteen. As the sky darkened, the gate was illuminated by lighting that cast shadows up the walls and gave it a warm glow.

We walked back to the campsite along the town wall where we stopped to drink coffee and wine at a bar that was carved into the wall. Dad thinks it was an old storage cave or something. We walked back, through the wall, and stopped on the bridge to look at the lights reflected on the river.

This morning we discovered we’ve packed two empty fuel canisters, so instead of making coffee at the tent, we packed up and headed back into town. We walked through the square which had to be completely rebuilt after WWI, and it was rebuilt to its former glory. The town hall was huge, its roof was covered in steeples and clock towers. It was positioned just in front of the cathedral and every fifteen minutes they chimed out the time together. We got coffee and sat in the sun in front of the cathedral and listened to the bells. However, our sixteen hours was almost up and we had (have) a long drive ahead of us. So we left Ypres and its tranquillity, as a town that seemed almost lost to time. In a world so directed towards development and progression, a town that, every single day, remembers such a major part of its history seems so special, and I am so glad that we decided to stop there and be a part of it.

As I write this we are crossing the border from The Netherlands into Germany with 500km left until we reached our next check point of Regensburg, in Southern Germany. 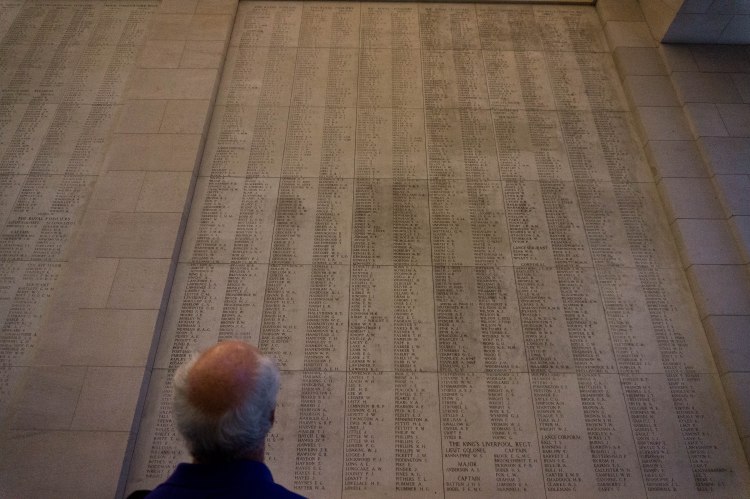 4 thoughts on “Sixteen Hours in Ypres”